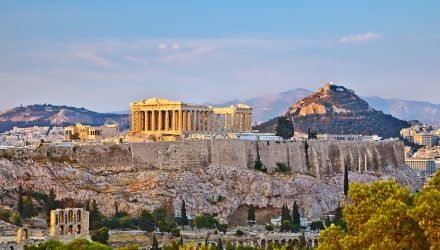 “The $260 million Global X MSCI Greece ETF, ticker GREK, jumped more than 3 percent after Bloomberg reported that Greece’s central bank is working on a plan under which banks could eliminate $47 billion of bad debt,” reports Bloomberg.

The health of Greek banks is of particular importance to GREK because the fund devotes over 22% of its weight to the financial services sector, its largest sector weight. GREK, which is just a few weeks shy of its seventh anniversary, follows the MSCI All Greece Select 25/50 Index.

Greece recently exited its bailout program, but the country still has plenty of work to do to get its economy back on solid footing. There are signs of progress.

“Greece ended nearly a decade of bailouts earlier this summer, following a wrenching financial crisis. Since 2010, the country has had to depend on three rescues totaling nearly $350 billion. Meanwhile, its economy has shrunk significantly and joblessness skyrocketed,” according to Bloomberg.

Greece’s economy is showing some modest signs of life, but its debt burden is significant, underscoring the importance of the central bank’s plan to help Greek banks shed some of their sour loans.