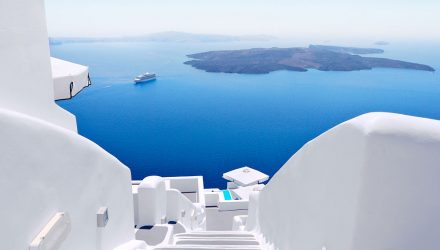 On a year-to-date basis, the Global X MSCI Greece ETF (NYSEArca: GREK) is one of this year’s best-performing single-country ETFs, but looks can be deceiving. After being drubbed Monday, GREK is lower by about 12% over the past month.

However, there are still some catalysts that could potentially help GREK rebound. Eurozone and emerging markets stocks are attractively valued relative to the U.S. and those discounts are evident with some of GREK’s holdings. That theme has been prompting investors to revisit the lone ETF trading in the U.S. that is dedicated to Greek stocks. Importantly, Greece’s finances are improving.

“As the global financial crisis spread in 2009, Greece’s debts became unmanageable. A 15% budget deficit that year led credit rating agencies to downgrade the country’s debt, causing Greece’s public borrowing costs to soar,” according to Global X research. “Despite an effort in 2010 to rein in spending, the country eventually acknowledged that it was headed towards a possible default. Given the amount of Greek debt held by major financial institutions around Europe, the ramifications of such a default were massive, even calling into question the Eurozone’s survival.”

“The European Union states decided on Monday to close disciplinary procedures against Greece over its excessive deficit after improvements in Greece’s fiscal position, confirming the country’s recovery is on the right track,” reports Reuters.