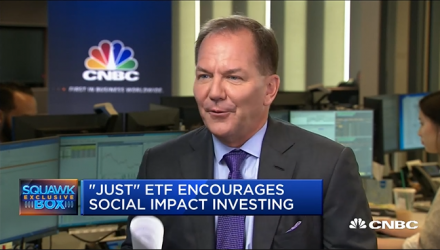 Goldman Sachs will introduce a new exchange-traded fund into the marketplace based on hedge fund titan Paul Tudor Jones’ nonprofit foundation Just Capital. Rather than assessing a company based on performance indicators like profitability, Just Capital ranks companies based on social impact—a significant departure from the norms of capitalism.

Goldman hopes that its foray into this new type of ETF, scheduled to launch under the ticker symbol “JUST,” will diversify its current business model to include environmental, social and governance issues.

“The way capitalism is practiced today, I’d say 80 to 85 percent of what the C-suite, what the corporate boardrooms do is manage for the profitability for the company and everything else comes after that,” said Jones. “It’s diametrically opposed to what the greatest people in the greatest country on Earth think should be the way they manage their companies.”