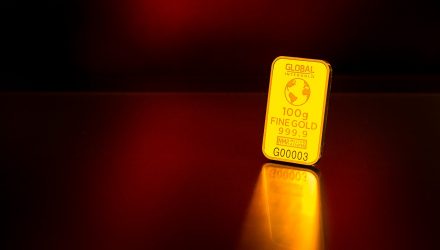 Last week, the Federal Reserve boosted interest rates, but that did not stand in the way of the SPDR Gold Shares (NYSEArca: GLD), iShares Gold Trust (NYSEArca: IAU) and other gold-backed exchange traded products posting weekly gains. Now, Goldman Sachs is bullish on the yellow metal, saying gold has the potential to “outperform”in the months ahead.

“For the first time in more than five years, commodity analysts at the U.S. investment bank are bullish on yellow metal prices. Goldman’s analysts said signs of an uptick in inflation and the ‘increased risk’ of a stock market correction should both prove to be price supportive for bullion,” reports CNBC.

While higher interest rates can serve to chase investors from gold because the yellow metal does not feature coupon payments or dividends, this time around could be different, particularly because the dollar has not been responsive to Fed tightening. Although the Fed is widely expected to raise rates multiple times this year, the dollar remains disappointing relative to other major currencies. Commodities, including gold, are denominated in dollars, meaning they usually have an inverse relationship to the U.S. currency.

Not That Bad When Interest Rates Rise