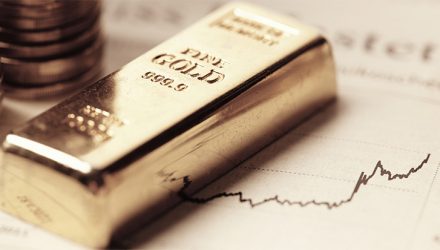 The Case for Gold

You could skip this note and just read Alan Greenspan’s 1966 essay Gold and Economic Freedom, but his is a little more dense and ideological.

His goes something like this: A Treasury bond is a claim, and as you issue more bonds, eventually you have more claims than assets.

That’s when inflation happens. We are there.

How We Got Here

Gold has been going up, in fits and starts, since the year 2000.

Y2K was a special time in monetary history—interest rates were high and currencies were strong. Financial conditions were tight. And the price of gold dropped below $300 an ounce and stayed there for a while.

I remember listening to the financial market report while driving my Toyota Tercel through downtown San Francisco and hearing that gold was two hundred-something an ounce. That sounds cheap, I thought.

Fast-forward two decades, and you’ll see that the last six months have been unkind to gold.

What’s interesting about it is that we’ve had a boatload of positive gold catalysts—unlimited deficit spending and unlimited monetary easing, not to mention some civil unrest thrown in—yet gold has been the worst-performing commodity.

This is impossible to measure, but it’s my belief that Bitcoin has drawn billions of assets away from gold. And in recent weeks, gold and Bitcoin have been negatively correlated. As Bitcoin has gone down, gold has gone up.

Bitcoin has proven that it is no store of value, after being so easily manipulated by a temperamental billionaire, in an elaborate pump-and-dump scheme. Nice asset you got there.

You can’t do that to gold—it’s simply too big. Even the Reddit jerks who tried to manipulate silver sustained heavy losses. These markets are large and liquid, and it just cannot be done.

Cryptocurrencies are very young. A good analogy is the internet bubble of the late 1990s when there were thousands of (mostly unprofitable) dot-com companies. Fast-forward 20 years, and all of them are gone except for four.

If you had correctly picked those four companies, you were rewarded with unbelievable returns. But if you invested in Webvan’s grocery-delivery business, for example, you got a zero.

It’s not easy to pick the winners, and that’s what we’re being asked to do with crypto.

Bitcoin might not be around in five years. Maybe not Ethereum, either. Maybe the winner will be something else. Maybe it will be central bank digital currencies. I put this one in the too hard pile, but I’m pretty sure of one thing. That is…

Precious metals in the aggregate represent 30% of my portfolio. For most people, I recommend 10% to 20%, whether they are implementing the Awesome Portfolio or not.

Adding gold to a portfolio improves its risk characteristics and dampens volatility.

And no asset class has a greater propensity to disappoint, to sell off at the most inopportune and inconvenient times, and rally when people least expect it.

The Only Reason NOT to Be a Gold HODLer

I’ve been dealing with the arbitrary and capricious nature of gold for 16 years, and I’ve reached the point where I just have a great deal of patience with it. It will go when it goes.

But gold does have a tinfoil hat element to it, though gold investors seem downright sane next to the Bitcoin investors.

The one lesson I took from that episode is that there is always a time to sell. Everything is a trade.

The Bitcoin people took this to an extreme, and they’re now sitting on a pile of losses. The older I get, the better I feel about taking profits, especially in the trades I like the most.

If we get a fiscally conservative president and a hawkish Fed, the jig will be up, and markets will discount that well into the future. So, I am always on the alert if the political winds start blowing in a different direction.

And gold appears to be breaking out to retest the old highs of $2,070 or so. That’s about 11% higher than today’s prices.

If you find that you don’t own enough, now might be a good time to start.

You can buy, sell, or even store precious metals right from your desktop. Here’s how.