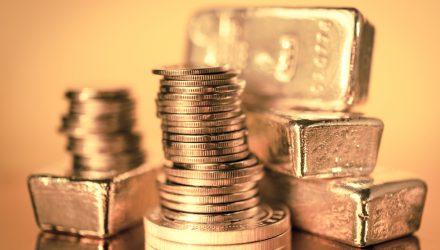 Precious metals exchange traded funds retreated on Friday, with gold prices slipping to their lowest level in over a month, after the strong July jobs report fueled fears that the Federal Reserve could cut back on its accommodative measures sooner than expected.

Weighing on precious metals, the U.S. non-farm payrolls report came in at a better-than-expected 943,000 addition in jobs over July.

“The job numbers are hitting gold because they blew away expectations, so the market is anticipating that the Fed’s taper date could be brought forward with an announcement in September and the actual tapering in early January most likely,” Phillip Streible, chief market strategist at Blue Line Futures, told Reuters.

With an improving economy and rising employment numbers, there is growing speculation the central bank could cut back on its bond purchasing program or cut interest rates sooner. The higher interest rates would also pressure non-yielding assets like gold and silver.

“With many states set to see the unemployment benefit top-ups expire in early September, healthy job gains should continue ahead, in line with elevated job openings. This print should be enough to allow the Fed to announce an early 2022 tapering of QE at the September meeting,” CIBC Capital Markets senior economist Katherine Judge told Kitco.

Edward Moya, senior market analyst at OANDA, also argued that the majority of the new jobs came from lower-wage leisure and hospitality sector roles, which are not inflationary, further pressuring the precious metal play as a hedge against rising prices.