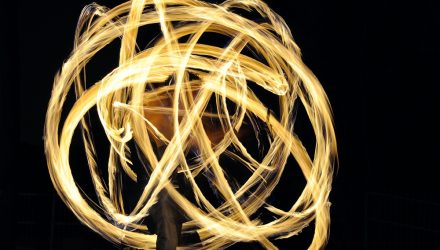 Gold lost ground on the month, though it still remains relatively better off than other assets on the year. Bullion currently sits at -3.46% compared to the S&P’s -13.34%. Silver had a positive month, but is still down 12.66% YTD.

Quant funds heavily shorted gold and commodities at the top of the month, causing gold to briefly tumble to $1,680.99 on July 15th, before quickly rallying back to close the month at $1,765.94. 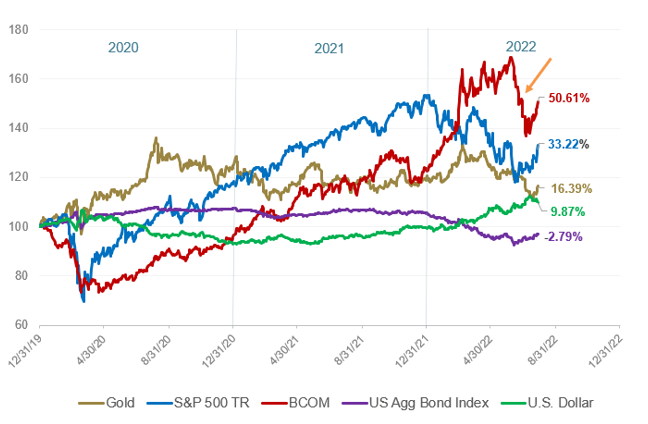 In contrast to gold, broader equities, which had slipped into a bear market, had their best one-month return in the past 10 years. Wong noted, “This rally was not driven by a Federal Reserve (Fed) pivot or an economic turnaround but was most likely the result of short-covering8 dynamics. The S&P 500 hit its recent low during the June 17 OpEx (the half-year Options Expiration tends to be very significant) as many hedges rolled off. Short covering, put options9 decaying and implied volatility10 declines all led to the further unwinding of hedges and created a ‘synthetic bid,’ or a defacto short squeeze.”

Despite a flurry of action on the equity and bond front, the real drama in July was in commodities. Prior to the July sell-off, the Fed tightened financial conditions at a rapid pace. Wong believes that this reduced liquidity caused most asset classes to lose value, resulting in an “everything” bear market where instead of risk asset capital moving toward safe havens, there was an across-the-board drawdown.

Wong said, “Since early June, following the tough May CPI report release, there has been a growing concern about Fed hawkishness and its negative effect on the growth outlook. This theme played out globally in July as most central banks were hiking aggressively to head off the risk of high inflation becoming further entrenched. As the global growth outlook weakened further, the commodities complex, which had been the star performing asset class year-to-date, gave way spectacularly.”

This, not unexpectedly, caused gold mining equities to get pummeled. Though gold mining equities fell below the $29–$30 support level, even testing the $25 level, Wong observed that, “Historical analysis indicates that when the gold miners’ EV/EBITDA15 ratio falls below 6x, the potential return within a six-month window has been about 21% on average over the past 10 years.”

Why Did Gold Fall?

In March of this year, gold was at $2,051. It has bled 17.26% of its value in four months. Wong believes the most obvious reason for the fall has been hawkish Fed policy and the expectations around it. 50 bps went from a hawkish outlier to the market prepping for 100 bps.

Secondary to hawkish expectations around rate hikes, the USD surge amid a weak yen and weak euro also dampened gold’s outlook. “As aggressive rate hike expectations were being priced in by markets, nominal yields quickly rose in anticipation of Fed hikes. However, breakeven yields were rolling over in anticipation of slower growth due to the higher rate effect on the economy. Real yields (real yield = nominal yield minus breakeven yield) rose sharply in this period, adding to USD pressure on gold,” Wong said.

He believes the market is currently following the 1970s inflationary bear market playbook, due to demand exceeding supply and inflation shock. Markets are “trapped,” according to Wong, “between a hawkish Fed and a weakening global growth outlook.” Despite the rallies in the broader markets, Wong sees recession shock on the horizon, concluding, “The recession shock and its associated risks have yet to be fully priced, and we would expect buying in gold to resume along with a short covering.”