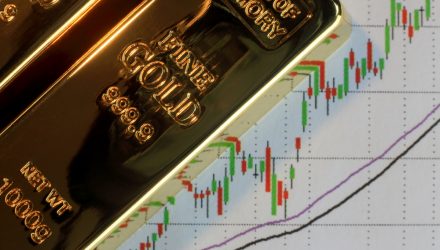 According to BlackRock data, gold ETPs’ global net inflows increased by fivefold month-over-month to $11.3 billion over March, outpacing the previous record of $9.4 billion in July 2020, the Financial Times reports.

The sudden spike in gold ETF investments also helped lift the gold bullion prices to within an inch of its all-time record set in early March, but it has since pulled back.

The buying has followed ongoing uncertainty in European equity markets, with Europe-listed stock ETFs in the Emea region suffering a record $5.5 billion in outflows over March.

“We have now had eight consecutive weeks of European equity selling, the longest period since October 2020,” Karim Chedid, head of investment strategy for BlackRock’s iShares arm in the EMEA region, told the Financial Times.

Due to the European countries’ close proximity to the war in Ukraine and the impact of rising energy prices and food inflation, Chedid argued that investors had “capitulated on their European exposure.”

“Europe is at a bigger risk of stagflation than other developed markets regions. It is more vulnerable to the energy shock,” Chedid added.

Chedid contended that while weaker growth and high inflation are “starting to be in the price” of European equities, he believed that “we need to see a peak in inflation so that investors can know what they are dealing with. Before we reach that peak, it’s hard to see sentiment significantly turning around in Europe.”

Meanwhile, gold ETFs have benefited from the rising inflation fears, attracting record inflows. Gold ETF assets under management are now just 1.8% below their all-time high recorded back in October 2020, according to the World Gold Council.

“We can see a structural upturn in the uptake of gold ETPs,” Chedid said. “It’s not hugely surprising,” given the metal’s appeal as a traditional haven during times of heightened risk and its historic role as an inflation hedge.