You are at:Home»Gold & Silver Investing Channel»Gold ETFs Could See a Rougher 2021 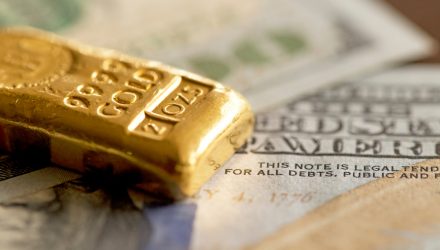 Gold ETFs Could See a Rougher 2021

Gold and related exchange traded funds have marked one of their best annual performances in years, and many are wondering if the precious metal can deliver again next year.

Meanwhile, gold bullion has gained over 24% to $1,902 per ounce for 2020, ending its best year since 2010 and outperforming the S&P 500, which rose about 15%. However, gold prices retreated somewhat in the last half of the year after hitting a record of $2,069.5 per ounce in August, on signs of an improving global economy.

Due to the improved risk-on sentiment, some investors anticipate a more moderate gain for the precious metal in 2021 as the economic outlook improves. Most notably, the risk sentiment will depend on how the U.S. manages the coronavirus resurgence and the eventual economic recovery process. Additionally, the runoff election in Georgia next month could add another layer of political risk to the market.

Gold traders are also looking at real yields or returns on bonds after adjusting for inflation, the Wall Street Journal reports. James O’Rourke, economist at Capital Economics, pointed out that the real yield on the benchmark 10-year Treasury note is at minus 1%, so the cost of holding gold, which pays no yield, instead of government bonds is relatively low.

“Real yields aren’t always the driver of the gold price, but with such low interest rates and higher inflation expectations, they are the primary driver,” O’Rourke told the WSJ.

Some also point to a weakening U.S. dollar that could further support gold as a better store of wealth. The aggressive fiscal and monetary stimulus measures, along with a shift toward riskier assets, could weigh on the USD. Since gold is priced in the greenback, a weak dollar makes it cheaper for foreign gold buyers.