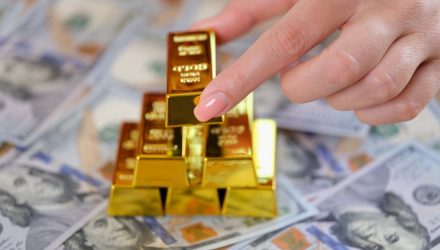 Gold has a history as a great, all-purpose portfolio defender. As a safe haven asset with a history of exceptional performance during inflation, gold fund has a reputation for being a reliable store of value. This year has seen an underwhelming performance for the yellow metal so far, but with the dollar finally showing some vulnerability and people like Jeff Bezos sounding the alarm about an imminent recession, the yellow metal is poised for a breakout – – which is good for a gold fund like SESG.

The Benefits and Convenience of the ETF Wrapper

Of course, there are many ways to get exposure to gold. For the modern moment, the Sprott ESG Gold ETF (SESG) is one of the most compelling avenues for physical gold exposure.

One of the perpetual knocks gold receives at the hands of its critics is that it is hard to purchase and costs money to store.

SESG circumvents that through its affordable .38% expense ratio and the convenience of being an ETF. ETF gold funds have long saved investors the headaches of having to rent out strong boxes at the bank (or dig a hole in the backyard) and the expense ratio of the fund is quite modest, especially given some of SESG’s other benefits.

SESG is Gold You Can Feel Good About

In a recent interview with VettaFi, Sprott CEO John Ciampaglia said, “For SESG, we have identified the companies we think are the most responsible, sustainable producers and we are sourcing the ETF’s gold just from those producers.”

Gold has a storied history of coming from mines that either exploit local populations or fail to live up to environmental standards. Even though ESG investing is in general something of a hot-button issue right now, SESG has the advantage of total transparency and traceability. As Ciampaglia also noted, “for gold mining companies, mining responsibly is not about ESG, it’s about the basic table stakes you need to operate effectively over the long term.”

Gold’s Brightest Days Are Ahead

Because gold has had a rough go of late, thanks largely to the strong dollar and headwinds from rising rates, it is currently available at a bargain price, making it an ideal time for investors to step in and get exposure – especially considering its reputation as a “second half” inflation player.

The World Gold Council’s research notes that when inflation outpaces interest rate increases like we’re seeing now, commodities like gold tend to overperform compared to traditional financial assets. Gold is also known for its negative correlation with stocks. In the past four decades, the price of gold has risen during six of the eight largest crashes.