You are at:Home»Equity ETFs»Gold Miners ETFs Look to Shine Again 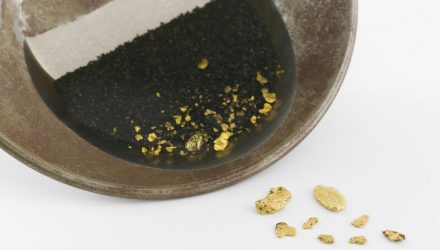 The VanEck Vectors Gold Miners ETF (NYSEArca: GDX), the largest exchange traded fund dedicated to gold mining stocks, is higher by 2.7% over the past month, but that lags the performances turned in by ETF backed by physical holdings of gold bullion.

However, some analysts believe gold mining stocks can join gold in moving to the upside. GDX is comprised of global gold miners, with a notable tilt toward Canadian and U.S. mining companies.

Stock fundamentals like cost deflation across the mining industry, share valuations below long-term average and rising M&A are all supportive of the miners space as well, but those fundamentals could be glossed over if the dollar strengthens.