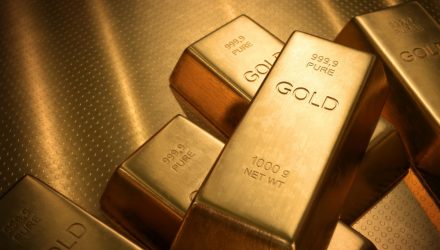 The SPDR Gold Shares (NYSEArca: GLD), iShares Gold Trust (NYSEArca: IAU) and other gold exchange traded funds are often viewed as safe-haven destinations, but the yellow metal finished lower in May even amid intensifying speculation that Italy is on the cusp of leaving the European Union.

If the chaos currently seen in Italy spreads to other countries in the region, that could spark gold higher.

“If the crisis continues and leads to an election that threatens whether Italy keeps the euro as its currency – and this sentiment spreads to other European nations — gold is likely to draw significant safe-haven buying, particularly if equities go into a freefall, analysts said,” reports Kitco News.

Another issue for gold is that the Federal Reserve meets in June and is widely expected to boost interest rates at that meeting, which would likely be a negative for gold. Over the past several years, gold has often declined heading into Fed meetings when investors widely expected a rate increase.