You are at:Home»Alternative ETFs»Gold ETFs Still in a Tough Spot 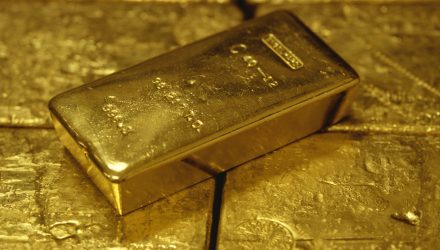 The SPDR Gold Shares (NYSEArca: GLD), iShares Gold Trust (NYSEArca: IAU) and other gold exchange traded products slumped in the second quarter with June being a particularly bad month. Despite modest gains on Friday, GLD and rival gold ETFs finished June with losses in the area of 4%.

Gold’s June weakness has the aforementioned ETFs and others looking vulnerable from a technical standpoint, particularly when considering recent moves below critical moving averages.

“Specifically, the 10-day moving average of GLD’s put/call skew on 10% out-of-the-money options recently topped 1.0, indicating puts are being priced higher than calls, last seen at 1.04. According to Schaeffer’s Quantitative Analyst Chris Prybal, this has historically preceded periods of outperformance for the gold exchange-traded fund (ETF),” according to Schaeffer’s Investment Research.

GLD, the world’s largest gold ETF, recently saw its 50-day moving average move below its 200-day line, the technical condition known as the “death cross.” As of Friday, the benchmark gold fund was an average of 4% below its 50- and 200-day lines.

“In the short term, returns are relatively muted, compared to GLD’s anytime returns since 2010. However, the fund’s average post-signal two-month return of 0.9% is more than double that of its anytime return of 0.4%. The gold fund also tends to be slightly more volatile starting two months after a signal, based on the standard deviation of returns since 2010,” reports Schaeffer’s.