You are at:Home»Alternative ETFs»Gold ETFs: Ready to Glitter Some More 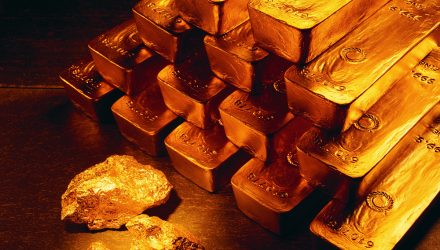 “Bullion has jumped 12 percent this year as the dollar weakened, turmoil in the Trump administration cooled optimism over reforms and tensions with North Korea sparked fears of conflict,” according to Bloomberg. “Money managers boosted net-bullish bets on New York futures to the highest since October, while billionaire Ray Dalio, who leads the world’s largest hedge fund at Bridgewater Associates, recommends investors consider placing as much as 10 percent of their assets in gold.”

The ongoing political drama in the U.S. has also weighed on the U.S. dollar, which helped support the gold outlook. With traders remaining skeptical that this week’s Federal Reserve meeting would do much to alter the recent weakness, gold has maintained its recent strength.