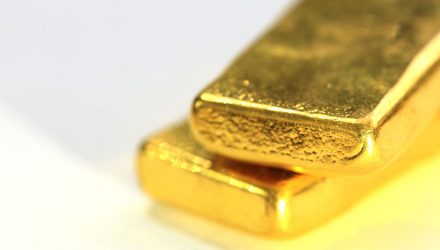 Gold ETFs are Getting Really Shiny

Some market observers see the yellow metal continuing its push to the upside. Year-to-date, the aforementioned gold ETFs are sporting gains of about 14%. Gold rose more than 2% in July, posting its best monthly gain since February. Another possible catalyst for gold entering the back of the year is lingering debate surrounding how many times the Fed can raise rates this year – one more is what many traders are betting on, and in 2018, three seems to be the bet there.

“Low bond yields generally lessen the opportunity cost of holding gold, as gold yields nothing and therefore investors are less tempted to pour into bonds than they are into the yellow metal. With U.S. Treasury yields near June lows, the drop in bond yields has partly accounted for gold’s recently rally that began in early July,” reports CNBC.

The ongoing political drama in the U.S. has also weighed on the U.S. dollar, which helped support the gold outlook. With traders remaining skeptical that this week’s Federal Reserve meeting would do much to alter the recent weakness, gold has maintained its recent strength. The dollar is one of the worst-performing major currencies in the world this year.

“Of course, gold’s advance has also been due in part to the decline in the dollar. The yellow metal and greenback have an inverse relationship, and while gold has rallied, the dollar has dropped about 9 percent from the start of the year,” according to CNBC.