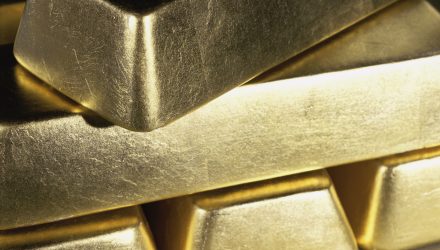 With the U.S. dollar continuing a slide that was present for much of 2017, investors put more money to work with gold-related exchange traded funds, such as the SPDR Gold Shares (NYSEArca: GLD), iShares Gold Trust (NYSEArca: IAU) and other gold-backed exchange traded products, in January, according to new data from the World Gold Council (WGC).

“Gold-backed ETFs added 27.6t (US$4.9 billion AUM) in January, growing assets by 5%,” said the WGC. “Global inflows were dominated by North America, a function of gold prices continuing their late 2017 rally, and the US dollar weakening.”

“US-listed ETFs accounted for 73% of global net inflows in January, reversing the 2017 theme in which European funds dominated net inflows,” according to the WGC.