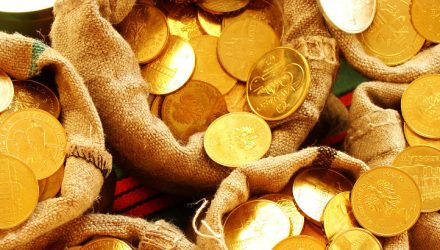 The SPDR Gold Shares (NYSEArca: GLD), the world’s largest gold-related exchange traded product, has been the dominant name in gold ETF investing since coming to market nearly 13 years ago. However, as is often the case in the ETF space, one fund’s success can inspire competition and that has certainly been true of GLD.

One of GLD’s primary competitors is the iShares Gold Trust (NYSEArca: IAU) and the rivalry between those two ETFs is heating up.

“Even in its best month since February, bullion gained only 2.2 percent in July, and concern is mounting that rising interest rates may crimp further gains. That’s helping drive investors who want to continue owning the metal toward lower-cost funds. Bullion held by SPDR Gold Shares, the largest ETF backed by the metal, have shrunk to the smallest in more than a year, while holdings in the cheaper iShares Gold Trust are near an eight-month high,” reports Luzi-Ann Javier for Bloomberg.

GLD saw $2.4 billion in net outflows over the past month, and overall gold ETF inflows slowed dramatically over the first half from last year’s record pace, according to the World Gold Council.