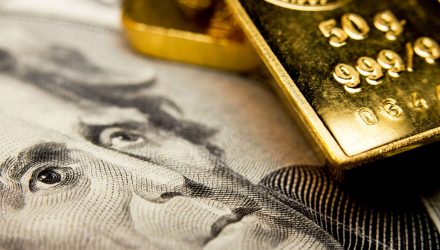 Gold ETF Catalysts to Watch in Weeks Ahead

The ongoing political drama in the U.S. has also weighed on the U.S. dollar, which helped support the gold outlook. With traders remaining skeptical that this week’s Federal Reserve meeting would do much to alter the recent weakness, gold has maintained its recent strength. The dollar is one of the worst-performing major currencies in the world this year.

“Since skimming the $115 level in early July, the SPDR Gold Trust (GLD) has surged more than 11% to trade at $127.98,” reports Schaeffer’s Investment Research. “Boosting the exchange-traded fund (ETF) has been diminished expectations for a Fed rate hike by year’s end, as well as rising geopolitical tensions with North Korea. Against this backdrop, there’s been an extreme demand for GLD calls. In fact, the 10-day moving average for GLD’s out-of-the-money put/call skew hit 0.80 on Aug. 23 — its lowest reading on record, according to Schaeffer’s Quantitative Analyst Chris Prybal — and closed last night at 0.84.”

Still, there has been plenty of put activity in GLD options, too.

“That’s not to say put traders have been absent on GLD, though. Put open interest is currently docked in the 96th annual percentile, with 1.2 million contracts open. Plus, GLD’s Schaeffer’s put/call open interest ratio (SOIR) of 0.57 is in the 100th annual percentile, meaning traders have rarely been more put-skewed toward options set to expire in three months or less. Peak put open interest of 39,776 contracts is found at the September 115 strike, though it’s unclear whether they were bought or sold,” according to Schaeffer’s.