You are at:Home»Alternative ETFs»Gold, Gold ETFs Could Rally Before Year End 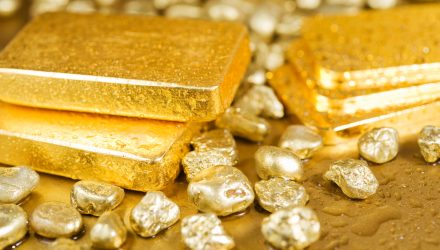 Last week, gold finished lower, marking its fourth straight weekly loss. On a monthly basis, the situation is more dire as the yellow metal has endured four consecutive months of negative finishes. However, some market observers believe gold can rally before the end of this year.

“Bullion may average $1,260 an ounce in the third quarter and rise further in the following three months as interest rate increases are priced in and physical demand emerges, Marcus Garvey, a London-based commodities strategist at ICBC Standard Bank,” reports Bloomberg.

The strengthening U.S. economy is translating to a stronger dollar, which is often a problem for gold. Gold, like other commodities, is denominated in dollars, meaning it has an inverse relationship to the U.S. currency. Still, there are compelling long-term catalysts for gold.

GLD, the world’s largest gold ETF, currently trades about 7.4% below its 200-day moving average and nearly 12% below its 52-week, both of which are considered bearish signs.

“Gold’s appeal has been fading this year with prices sliding near to the key $1,200 level, partly because of an upbeat outlook on the U.S. economy that’s strengthened the dollar,” according to Bloomberg.