You are at:Home»Equity ETFs»Going to the Bank With Financial ETFs 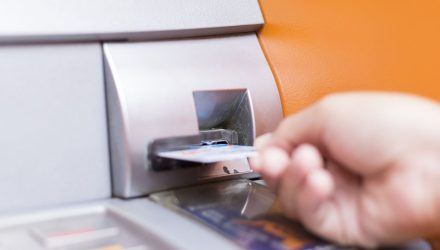 Going to the Bank With Financial ETFs

The Financial Select Sector SPDR (NYSEArca: XLF), the largest financial sector-related exchange traded fund, is off 5.5% over the past month, bringing its year-to-date gain to a market-lagging 2.7%. XLF’s recent slide underscores the frustrations associated with the financial services sector this year.

Interest rate concerns are evident following recent commentary from some big-name bank executives. Additionally, analysts have been reining in second-quarter earnings estimates for large banks, based in large part on declining net interest margins. However, financial services is widely seen as one of the few legitimate value opportunities in the U.S. equity market.

“The top six of its components make up about half of the XLF ETF. These are quality names like Bank of America Corp (NYSE: BAC), JPMorgan Chase & Co. (NYSE: JPM), Goldman Sachs Group Inc (NYSE: GS) and Berkshire Hathaway Inc. (NYSE: BRK.B). Fundamentally, they are the cream of the crop with reasonable valuations. They sell at PEs in the low teens and most pretty close to book value,” according to InvestorPlace.

Bankers are witnessing diminished demand for big loans out of businesses partly due to uncertainty over policy action on Capitol Hill. In addition, while the Federal Reserve’s rate hikes have helped banks earn more on loans, benefits were partially pared down by declines in long-term rates, with yields on Treasuries falling over the second quarter.