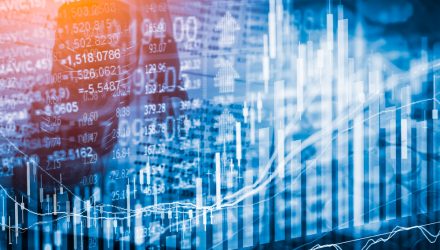 World stocks and related exchange traded funds rebounded on Monday, but global equities were still on pace for one of their worst monthly starts to a new year since 2016.

The iShares MSCI ACWI ETF (NasdaqGS: ACWI) rose 1.6% on both Monday and Friday, but the ETF that tracks the MSCI All Country World Index still fell 6.5% year-to-date.

While traders stepped back into risk assets, ongoing concerns over rising interest rates and geopolitical tensions in Eastern Europe remain a lingering uncertainty for investors.

The MSCI World index remains 6.2% lower in January, the worst start to the year since 2016, Reuters reports. Prior to last Friday’s bounce, the index had been moving toward its worst January since the global financial crisis of 2008.

“This is not the classic selloff affecting lower quality underperforming companies. This selloff is driven not by fundamentals but by the action of central banks at a time when growth is very strong,” Flavio Carpenzano, investment director at Capital Group, told Reuters.

“For years you were like a spoiled child, you could get all the money you wanted and for free and you could buy what you wanted, you didn’t care that much about quality. Now it’s the other way round, you have to be more disciplined so you need to look carefully at valuation,” Carpenzano added.

The Federal Reserve has signaled that it was willing to taper its bonding purchasing program and hike interest multiple times this year to combat inflation, which has jumped to multi-decade highs.

The options markets have even been pricing in five rate hikes from the Federal Reserve this year to 1.25%. Nevertheless, investors still believe rates will be seen at a historically low 1.75% to 2.0%.

“The bond market may have settled into a flattening yield curve, reflecting an outlook for several rate hikes over the course of this year and then at least a pause as the economy adjusts,” Tim Ghriskey, senior portfolio strategist at Ingalls & Snyder, told Reuters.

Meanwhile, the ongoing tension between Russian and Ukraine has fueled geopolitical risk, threatening a potential military incursion and cutting a vital gas pipeline to Western Europe. Moscow, though, denies any plans to invade Ukraine.