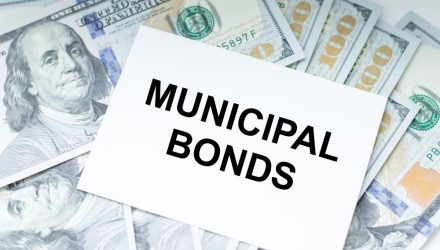 Take Advantage of the Muni Bond Rally With RVNU

Municipal bonds are having their day in the sun, with state- and local-government debt enjoying a three-day rally on Tuesday. On Tuesday, 30-year maturities for muni debt approached their biggest one-day gain since June as investors considered the possibility that the Federal Reserve will slow down the pace of its aggressive rate hikes.

While municipal bonds have been wading in fixed income’s swamp of sadness this year, broad-based muni bond benchmarks have been outperforming their aggregate bond counterparts. Some experts are seeing opportunities in the space.

Though noting that the latest rally “feels more like a pleasant interruption” than a trend, Sylvia Yeh, co-head of municipal fixed income at Goldman Sachs Asset Management, added that “the market feels firm.”

And with yields on municipal bonds currently sky high (10-year benchmark yields are the highest they’ve been since 2011, and 30-year munis are yielding more than comparable U.S. Treasuries), Yeh said at a Bloomberg muni market panel discussion that those prices are drawing investors seeking income in a market where many state and local governments have no shortage of cash.

Those wanting to increase municipal bond exposure to their investment portfolios may want to consider the Xtrackers Municipal Infrastructure Revenue Bond Fund (RVNU), which tracks an index of investment-grade municipal bonds backed by revenue from local infrastructure projects like airports, water and sewer, and toll roads. Holdings include bonds issued by the New York City water and sewer system, the San Francisco City & County Airports, and the Tampa-Hillsborough County Expressway Authority.

However, according to the ETF’s FactSet Analyst Report, RVNU targets a narrow slice of the muni bond market, which may increase credit risk.