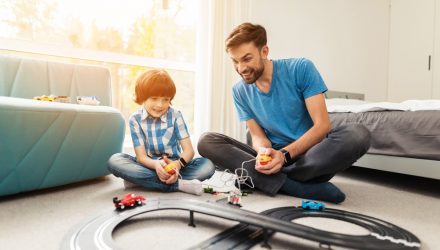 It’s not just kids that love Grogu (a.k.a. “Baby Yoda”). Consumers aged 12 and older are responsible for a quarter of all toy sales annually, and the biggest driver of growth throughout the toy industry, according to data from the NPD Group.

Looking at the three-year compound annual growth rate from 2019 to 2022, NPD found that toy industry sales revenue grew 12% year-over-year, driven by an average selling price growth of 8%, while unit sales were up 4% over that period. For January through September 2022, sales revenue increased by 3%, and unit sales declined by 3%. The average selling price increased by 6% compared to last year.

This demographic, known as “kidults,” has been steadily contributing to the industry for years, but spending has sped up since the start of the pandemic.

“Over the last two years, most of the sales gains in the global toy industry came from the so-called kidults, teenage and adult consumers who enjoy things like playing board games, building sets, puzzles or collecting action figures,” wrote Frédérique Tutt, NPD’s global toys industry analyst. “These consumers make up a good percentage of those who wait until the last minute to make their purchases.”

Toy manufacturers have targeted these kidult consumers through product lines that appeal to nostalgia and target older customers, as demonstrated by Hasbro’s Black Series of action figures and Mattel’s Barbie and Hot Wheels lines specifically designed for this consumer group. These companies have also begun creating film and TV content that cater to older customers, such as the “Barbie” and “Dungeons & Dragons: Honor Among Thieves” films.

This trend could impact the Xtrackers Russell 1000 Comprehensive Factor ETF (DEUS), which has holdings in both toymakers Mattel and Hasbro. DEUS seeks investment results that correspond generally to the performance of the Russell 1000 Comprehensive Factor Index, which is designed to capture exposure to large-cap U.S. equities using five factors: quality, value, momentum, low volatility, and size.