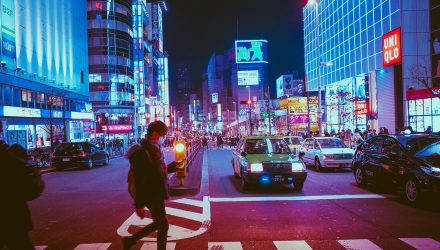 “The most heavily populated EWJ strikes reside in the June series, with the 60 put at the top of the list. The bulk of the 41,367 contracts outstanding here were initiated back on Jan. 23, when EWJ was trading near $64.50. Traders also targeted the June 69 call that day, which is home to peak call open interest of 27,572 contracts,” reports Schaeffer’s Investment Research.

“More recently, the fund’s June 56 and 59 puts have seen the biggest increases in open interest over the past two weeks. Trade-Alert shows the majority of the action occurred on March 7, due to one trader possibly initiating a long put spread,” according to Schaeffer’s.

An Alternative Japan ETF to Consider

An alternative to EWJ includes the Deutsche X-trackers Japan JPX-Nikkei 400 Equity ETF (NYSEArca: JPN), which recently lowered its annual fee to 0.09% from 0.15%, making it one of the least expensive Japan ETFs on the market.