You are at:Home»Investing»How to Get Rich the Conor McGregor Way 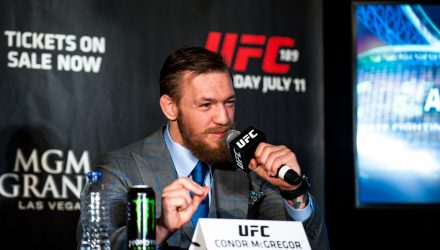 How to Get Rich the Conor McGregor Way

He is bold and brash. He is loved by his fans and hated by his enemies. But one thing that cannot be disputed is Conor McGregor has become rich, very rich. Whatever you think of the UFC mixed martial arts fighter from Crumlin, Ireland, you cannot question his meteoric rise from apprentice plumber to two division champion of the world.

Behind the trash talk, the secrets to his success lie in plain view. We examined traits of Conor McGregor to uncover a blueprint to his success.

How To Manifest Success

Perhaps the most influential self-help author of all time is Napoleon Hill, who challenged his readers to create a definite major purpose in life. He claimed that 98% of people had no firm beliefs, which put success out of their reach. The notion that “if you can conceive an idea, and truly believe it then you can achieve it” is a core principle required to succeed according to Napoleon Hill.

In Conor McGregor, that most important of all attributes is evident. In plain sight, McGregor shares one of the secrets to his success within the first few seconds of this video when he says:

“if you can see it here (pointing to his head), and you have the courage enough to speak it, it will happen”.

Gloss past that statement in a hurry, and the power of it can be easily lost. There is no need to step into Conor McGregor’s shoes to conceive of the courage needed to face the world’s media and proclaim yourself the best fighter of all time. Simply think of a goal you want to achieve that may seem unrealistic, and imagine the courage it takes to speak it fearlessly among friends, on social media, and to strangers. How easy would you find it to take the plunge and start the journey to realizing your long-held goals?

When you share your goals in social situations, you create what Robert Cialdini calls a commitment device in his famous book, Influence: The Psychology of Persuasion.

According to Cialdini, when you commit to a goal, you are more likely to honor that commitment, because otherwise your self-image may be tarnished. For example, if your motivation changes or the incentive to reach your goal is removed, you will still keep going so as to honor the commitment you made publicly to others. Following through on your commitment to others leads to a congruent self-image.

McGregor also references the infamous book on manifesting success, The Law of Attraction and says:

The Power Of Focus

A key attribute of highly successful people is to focus on a single goal. Walk through the average person’s day and it will involve waking up to some breakfast, going to work, coming home, watching a little TV, perhaps enjoying some exercise, and sleeping. But what if every part of every day was focused on a single goal?

For Conor McGregor, the food he eats affects his performance, so he is disciplined in his eating habits. His training regimen is his work, so he focuses on every aspect of improving his performance by working not only with wrestling, jiu jitsu, and boxing coaches but also with Ido Portal, a movement and fitness coach.

In this tweet, Conor McGregor captures how every day his attention is focused on becoming better at his craft of mixed martial arts fighting.

After you have chosen your Definite Major Purpose, how much faster will you achieve your goal if, every second your day, your brain is focused on turning your goal into a reality?

Focus becomes second nature when you practice it again and again. Another way of saying that is: becoming focused is easy when it is a habit. If you haven’t already read Stephen Covey’s bestseller, The 7 Habits of Highly Effective People, it’s worth every moment of your time.

How To Deal With Failure

No worthy goal is achieved without setbacks along the way. Whether building a business, climbing one of the peaks in Nepal, or graduating college, failure is the fate that every conqueror must overcome.

McGregor has suffered injury setbacks, defeats, and failure too, but he has bounced back stronger than ever each time. And his coach, John Kavanagh, has perhaps the simplest yet most powerful philosophy to confront and overcome failure: Win or Learn.

“I never lose. Either I win or I learn”