You are at:Home»Alternative ETFs»Gasoline ETF Jumps as Harvey Hits Refineries 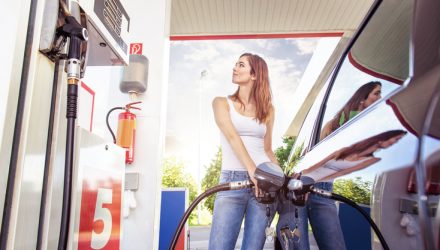 For instance, the United States Gasoline Fund (NYSEArca: UGA) was up 1.8% while RBOB gasoline futures were 2.8% higher to $1.7135 per gallon. Additionally, the United States Diesel-Heating Oil Fund (NYSEArca: UHN), which follows futures contracts on heating oil or No. 2 fuel, gained 1.2% as heating oil futures were 0.7% higher to $1.6337 per gallon.

Flooding caused by Harvey forced refineries around the Gulf Coast to close, which weighed on production or supply of refined energy products like gasoline and heating oil.

The damages from Hurricane Harvey are expected to cut at least 1 million barrels per day from refining capacity, with Shell, Exxon and several other refineries in the area announced plans to shut down on Sunday, CNBC reports.

“The big picture is that we’ve got all the refineries down in Corpus Christi and half of them are now down in the Houston area. And I anticipate the other half are going to shut down over the next couple of days, which means that one-fifth of the nation’s capacity is offline. The biggest issue that they’re facing is the amount of flooding and the damage to the equipment that perhaps might keep them offline for weeks or even months,” Andy Lipow, president of Lipow Oil Associates, told CNBC.