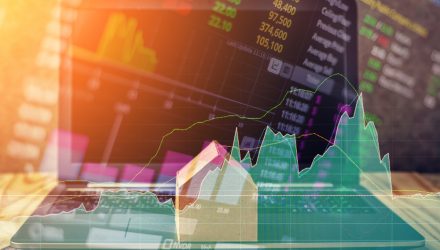 This Real Estate ETF Is Unique and That’s Positive

There are hundreds of examples of exchange traded funds doing exactly what their names imply, but there are also examples of ETF titles being deceiving.

The Goldman Sachs Future Real Estate and Infrastructure Equity ETF (GREI) is in the more positive of those two categories. While GREI is chock full of real estate stocks – 51.5% of its lineup to be precise – it more than lives up to its infrastructure billing as well.

Utilities stocks are among the more venerable assets in infrastructure and on that front, GREI doesn’t disappoint. The actively managed ETF allocates 26.5% of its weight to utilities, making that GREI’s second-largest sector weight behind real estate. This year, that big utilities exposure is working in favor of GREI investors despite rising interest rates.

“Guggenheim’s Shahriar Pourreza notes that utility companies have historically been highly sensitive to rising rates, but that narrative is changing as the sector boasts strong earnings and investors come to view it as a hedge against inflation,” reported Samantha Subin for CNBC.

Add to that, GREI’s utilities components are being supported by other factors, and that supports the case for the ETF at a time when growthier, less defensive sectors are languishing.

“Tax credits from the Inflation Reduction Act, ongoing infrastructure projects, and the search for energy security given this year’s geopolitical crisis in Ukraine have provided tailwinds to the sector and should continue to do so going forward, Pourreza added,” according to CNBC.

NextEra Energy (NYSE: NEE) and National Grid Plc (NYSE: NG) are GREI’s top holdings, combining for 9.3% of the ETF’s roster. NextEra has significant inroads into renewable energy, making it a potential beneficiary of the Inflation Reduction Act. Among the other GREI utilities holdings, Wall Street is bullish on is Xcel Energy (NYSE: XEL).

Adding to the allure of GREI is the point that utilities stocks are sporting attractive valuations, which is notable because the sector is often richly valued owing to its favorable volatility traits.

“Valuations have expanded but we don’t see a clear case that the group is overpriced yet — valuations relative to the S&P 500, historical levels, and bonds are all below prior peaks over the last 10 years, so absent an economic uptick, we think the space is still reasonably valued for its defensive characteristics,” said Morgan Stanley analyst David Arcaro in a recent report.