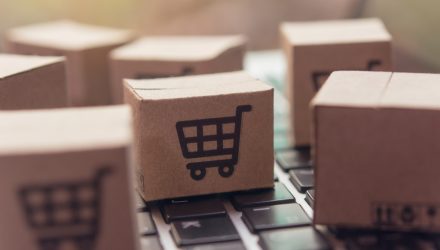 This could be an eventful year for e-commerce and online retail, potentially putting exchange traded funds like the Goldman Sachs Future Consumer Equity ETF (GBUY) in the spotlight.

As has been widely noted, the coronavirus pandemic accelerated adoption of online retail over the past two years, though it was already rapidly expanding prior to the global health crisis. However, there are concerns that the rate of growth seen in recent years can’t or won’t be replicated in 2022.

Slower online retail growth doesn’t necessarily dent the GBUY thesis. Consider this: It’s estimated that U.S. online retail grew at just over 16% last year and is forecast to dip to growth of 14% this year. That’s still exceptional, and 14% growth is by no means a reason to ignore GBUY. Plus, there are emerging trends to watch for in 2022.

“Retailers launching their own marketplaces is already a trend Digital Commerce 360 is keeping watch on, with several top online retailers dabbling in the space in 2021. The model is attractive for retailers wanting to offer a wider variety of inventory, without the responsibility associated with purchasing, warehousing and fulfilling those items,” reports Digital Commerce 360, citing Jessica Young, the publication’s director of research data.

GBUY could be responsive to that trend due to stakes in companies like Alphabet (NASDAQ:GOOG) and Shopify (NYSE:SHOP), among others. The Goldman Sachs ETF also offers some leverage to a potential rebound by downtrodden Chinese consumer internet equities.

“Alibaba has been a poster child for the Chinese government’s crackdown on alleged monopolistic behavior. Since economic growth began slowing in the last several months, analysts say the worst of the regulatory crackdown might be over as authorities focus more on supporting the economy,” reports Evelyn Cheng for CNBC. “The beginning of the UBS analysts’ positive turn began in November, with an upgrade of emerging markets consumer discretionary stocks, which includes many internet companies.”

Alibaba isn’t a GBUY component, but JD.com, Meituan, and Tencent are. Overall, GBUY has a weight of 20.5% to Asia ex-Japan, the bulk of which is Chinese stocks.

GBUY’s diverse lineup is relevant because some experts believe that the Biden administration will continue pursuing antitrust challenges against Amazon (NASDAQ:AMZN), the ETF’s second-largest holding. Those are matters for the courts, and Amazon is accustomed to dealing with government scrutiny, but GBUY’s structure could ensure that investors don’t feel much pain on this front.