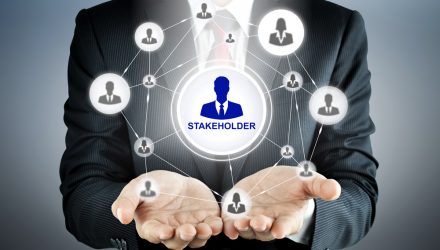 The rapid rise of the environmental, social, and governance (ESG) movement is that, at the fund level, products are becoming nuanced.

The $272.73 million JUST follows the JUST U.S. Large Cap Diversified Index developed by JUST Capital.  A base definition of stakeholder capitalism is that it’s a form of capitalism under which companies can do right by constituencies beyond executives and shareholders.

The ease of conveying stakeholder capitalism is a favorable point for JUST and relevant at a time when there are seemingly more questions than answers regarding exactly what defines ESG.

Add to that, JUST could be an interesting alternative for investors seeking core equity exposure because some big names are paying more attention to the stakeholder capitalism concept. These include BlackRock (NYSE: BLK) CEO, Larry Fink.

“Stakeholder capitalism is not about politics. It is not a social or ideological agenda. It is not ‘woke,’” Fink recently wrote. “It is through effective stakeholder capitalism that capital is efficiently allocated, companies achieve durable profitability, and value is created and sustained over the long term. Make no mistake, the fair pursuit of profit is still what animates markets; and long-term profitability is the measure by which markets will ultimately determine your company’s success.”

“All we’re saying is when we wake up in the morning, what we give a s**t about is serving customers, earning their respect, earning their repeat business,” Dimon said, according to the Financial Times.

From a more traditional perspective on capitalism, JUST holds 472 stocks and as Goldman Sachs Asset Management (GSAM) — the fund’s issuer — notes, JUST can have high correlations to standard equity indexes such as the Russell 1000 and the S&P 500, indicating the ETF is a legitimate alternative to standard plain vanilla pure beta offerings.