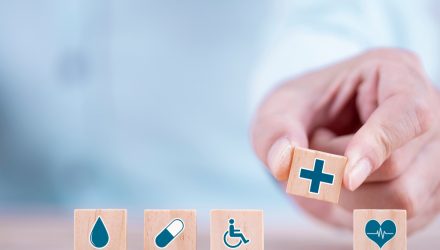 The U.S. doesn’t have nationalized healthcare comparable to some other developed countries, and it is home to one of the most lumbering, inefficient healthcare systems.

It would be to the benefit of healthcare providers, doctors, nurses, and investors if those inefficiencies were quashed. Efforts to that effect are already taking place, but when it comes to exchange traded funds with leverage to that theme, investors need to be picky.

Looked at another way, investors need fresh, modern approaches to healthcare to effectively tap into a new era of the space. The Goldman Sachs Future Health Care Equity ETF (GDOC) is an example of ETF with exposure to that theme.

Actively managed, GDOC features some of the hallmarks of traditional healthcare ETFs, including allocations to blue-chip pharmaceuticals companies, but the ETF is also relevant when it comes to the increasing modernization of healthcare. That makes it a relevant play on efforts to bring more efficiencies to the space.

“It’s no secret America has one of the least-efficient healthcare systems in the world, far outspending other wealthy countries for poorer results. The high cost of everything from medical procedures to cancer drugs often gets much of the blame,” reported David Wainer for the Wall Street Journal.

A big problem with the U.S. healthcare system is that doctors are compelled to provide patients with an array of treatments and drugs, some of which aren’t always necessary. That’s burdensome and costly and has limited benefits.

“In the U.S., everyone from your primary-care doctor to your cardiologist has an incentive to make you consume as much healthcare as possible, from the prescription drug you could do without to the expensive surgical procedure you might be able to avoid through physical therapy,” according to the Wall Street Journal.

Conversely, a more efficient system could eliminate some of those superfluous steps, potentially boosting patient outcomes along the way. Some GDOC components are levered to that theme, potentially bolstering the long-term case for the ETF.

Adding to the case for some GDOC components is the point that there’s mounting pressure on healthcare providers to drive costs lower. That’s an admirable goal that is achievable with more modernization.

“We are still in the early stages, with more than 70% of provider revenue tied to fee-for-service arrangements, according to Gist Healthcare. But analysts including Ryan Daniels at William Blair see value-based care expanding in coming decade as pressure to reduce healthcare costs grows,” concluded the Wall Street Journal.