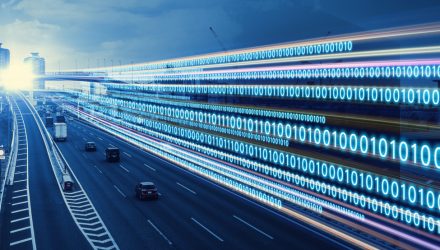 Infrastructure investing was all the rage last year when Congress was working on what turned out to be a bipartisan package, but it feels as though the combination of that bill becoming law and equity markets turning sour in 2022 has investors glossing over this theme.

Market participants may want to reconsider that line of thinking because infrastructure is a long-term concept. It’s also evolving and adding more growth and technology to the mix, indicating investors’ need to make related exchange traded funds that are up to the task. The Goldman Sachs Future Real Estate and Infrastructure Equity ETF (GREI) is.

GREI is cut from a different cloth compared to old guard counterparts in its category and that’s a plus because the fund has features of a traditional infrastructure ETF while being ready and able to meet the demands of evolution in this asset class.

“For one, elements of it can be seen all around. From roads to airports and energy infrastructure, these assets are essential to industry and households alike. Future needs also appear to be rising at a rapid pace. Infrastructure has the potential to benefit from increased demand for capital over the long term,” according to BlackRock research.

As investors in the U.S. know, the engine that often drives infrastructure investing is government spending. That much was on display with the aforementioned legislation passed last year, but market participants should also note that the theme extends beyond U.S. borders. On that front, GREI is relevant because it allocates about 37% of its roster to international equities.

“An estimated $95 trillion of cumulative investment could be needed to meet global infrastructure demand over the next two decades, World Bank data show,” added BlackRock.

GREI is pertinent for other reasons. In addition to the potent income proposition offered by the combination of real estate and infrastructure, the latter isn’t highly correlated to economic data, meaning GREI may offer some recession protection.

Additionally, the real estate/infrastructure combination could prove fruitful for investors concerned that today’s inflationary environment will persist into next year and perhaps beyond.

“Long-term contracts are common. Contracts can span decades – a significant advantage in a volatile environment, in our view. Infrastructure assets also have the potential to hedge some of the effects of inflation. Most power and utility assets link their costs and prices to inflation through regulations, concession agreements, or contracts,” concluded BlackRock.