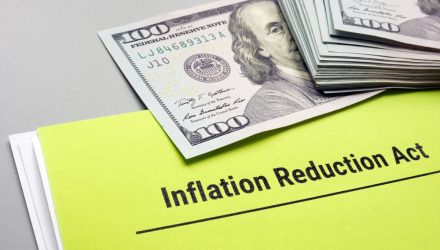 Indeed, the bill represents a massive government spending commitment to renewable energy and with that,  there are perceived benefits for an array of ETFs, including the Goldman Sachs Future Planet Equity ETF (GSFP).

“To the upside, the provisions that have had the greatest and most immediate impact on our valuations are contained within the nearly $400 billion spending plan to support the development and build out of clean energy. This is the largest federal government spending increase on alternative energy in U.S. history, and its impact is scheduled to last over the next decade,” notes Morningstar analyst Dave Sekera.

GSFP is proving responsive to the favorable headlines out of Washington D.C. The Goldman Sachs ETF is higher by 10% over the past month, topping the S&P 500 by 160 basis points during that time. Adding to the allure of GSFP against the Inflation Reduction Act backdrop is that the aforementioned level of spending won’t happen overnight, indicating there are long-term benefits that could be accrued.

“We think IRA of 2022 could further boost longer-term spending as well as the sentiment toward clean energy, and we see continued multi-decade investment from U.S. states, companies, as well as other countries,” according to analysts at Citi.

Bolstering the GSFP proposition as a long-term idea for surging renewable energy expenditures is the point that the ETF is actively managed, meaning it can hone in on specific areas of the decarbonization effort, positioning investors to capitalize in the process.

Additionally, GSFP’s status as an active fund is important because the managers can seek value opportunities, which could become important as many green energy stocks have run up on the back of Inflation Reduction Act headlines.

“We do think investors’ confidence level in higher projected energy transition/clean energy spend can be seen in our companies’ valuations, and more importantly, we think the higher multiples are sustainable/justified based on the increased likelihood that clean energy focused spend will rise significantly over the next several years with IRA of 2022 as a catalyst,” Citi said.