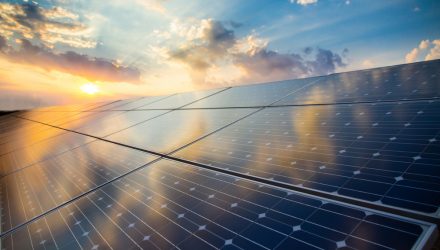 It’s understandable that investors who were once enthusiastic about the prospects of increased government spending on renewable energy are feeling a little jilted this year.

That also explains why some of the related exchange traded funds are dithering on a year-to-date basis. However, the Goldman Sachs Future Planet Equity ETF (GSFP) remains a candidate for investors looking to participate in climate-aware investing in a long-term fashion.

As an actively managed exchange traded fund, GSFP can move swiftly to provide exposure to emerging trends and high-quality companies throughout the renewable energy ecosystem. Those are relevant considerations at a time when plenty of clean energy concepts, including solar, are coming back into focus.

A recent study by the Department of Energy (DOE) indicates that solar could provide 40% of U.S. electricity by 2035 without raising power bills for customers.

“The study illuminates the fact that solar, our cheapest and fastest-growing source of clean energy, could produce enough electricity to power all of the homes in the U.S. by 2035 and employ as many as 1.5 million people in the process,” said Secretary of Energy Jennifer M. Granholm.

While GSFP isn’t a dedicated solar ETF, it’s relevant in this conversation because it can increase exposure to that industry if the managers see fit. Additionally, GSFP allocates over half its weight to the industrial and technology sectors, groups where parts and components suppliers to solar companies dwell. The DOE study confirms the relevance of that for GSFP investors.

As an active fund, GSFP can reach into other climate-charged investing arenas, including the race to carbon neutrality and shoring up electrical grids. Both are compelling, investable concepts.

“Reduced carbon emissions and improved air quality result in savings of $1.1 trillion to $1.7 trillion, far outweighing the additional costs incurred from transitioning to clean energy. The projected price of electricity for consumers does not rise by 2035, because the costs are fully offset by savings from technological improvements,” adds the DOE.

GSFP is about two months old and has $60.65 million in assets under management.