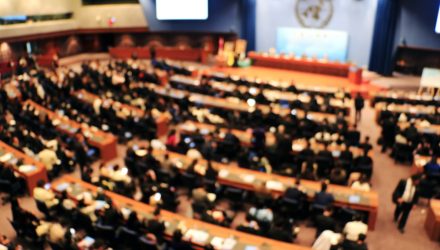 The United Nations Climate Change Conference, known as COP26, kicked off on Sunday and runs through Nov. 12 in Glasgow, Scotland. Held since 2015, COP26 is one of the world’s marquee climate conferences, and with that status comes opportunity for investors.

Although it’s fresh on the scene at just a few months old, the Goldman Sachs Future Planet Equity ETF (GSFP) is an exchange traded fund that could be in focus over the near-term thanks to COP26.

Since the first COP2 in 2015, “a flurry of national pledges to slash emissions to net zero–to take as much carbon out of the atmosphere as one is putting in–by 2050 has ensued. More promises have followed from an array of municipalities, companies, and other issuers,” writes Morningstar analyst Leslie Norton.

The timing of COP26 and the notion that GSFP is worth considering are factors that are hard to ignore. The Goldman Sachs ETF focuses on companies that are developing services and technologies aimed at paring carbon emissions — an admirable and relevant goal at a time when some other large global economies are boosting consumption of fossil fuels.

Many countries are working diligently to reduce carbon emissions, and that could bode well for GSFP during COP26 and over the long-term.

“As the United States rejoined the Paris Agreement this year, President Joe Biden called for a national reduction in greenhouse gas emissions of at least 50% by 2030, from 2005 levels. Lately, even Saudi Arabia, the world’s largest exporter, promise to reach net zero emissions by 2060,” adds Norton.

Adding to the GSFP case is the fact that COP26 could bring more clarity regarding exactly what “net zero” means. Lack of clarity around some of the most commonly used green energy terms is confusing for some investors. More clarity and reduced greenwashing increases the appeal of sustainability in investor portfolios.

“Sustainable investing has grown significantly in the past five years as more investors have become increasingly concerned about the impact that climate change and other environmental, social, and corporate governance issues have on their investments–and about the broader impact of their investments on the world,” notes Norton.