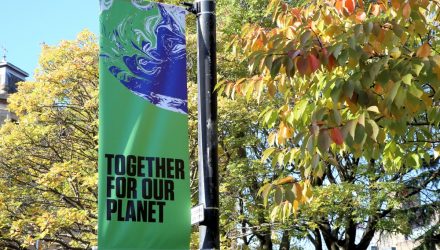 Obviously, talk is cheap. Companies and governments need to walk the walk on climate change, but the chatter emerging from COP26 underscores compelling long-term cases for ETFs such as GSFP.

“Nepal, New Zealand, Thailand, and Vietnam each presented updated climate commitments at or just prior to COP26, while noting that they are responsible for miniscule shares of global GHG emissions and yet are disproportionately at-risk from climate change,” according to IHS Markit. “New Zealand will raise its nationally determined contribution (NDC) goal to a 50% GHG reduction, up from a prior goal of 36%, said Prime Minister Jacinda Ardern prior to speaking at the global meeting. This would reduce the nation’s targeted emissions to 571 million metric tons (mt) in 2030, compared with the current 623 million mt.”

Important to the longer-ranging thesis for an asset like GSFP is whether or not global governments commit the necessary capital to carbon-reduction efforts. It appears some are moving in that direction.

“Developing nations have been saying during the lead-in to COP26 that they need financial support for both the energy transition and climate adaptation, and that message is resonating with developed nations, multilateral development banks, and foundations—all of which this week pledged new funds to support an equitable global transition,” adds IHS Markit.

The bulk of GSFP components are U.S. and European companies, and while those regions are leaders in addressing climate change, there’s ample work to be done in developing economies, indicating that there’s new market potential for GSFP holdings.

That opportunity set could be sped along by the Global Energy Alliance for People and Planet (GEAPP), which is looking to bring more renewable energy to developing Asia and Latin America, among other regions.

“At the outset, GEAPP has $10 billion in commitments from philanthropic entities like the Rockefeller Foundation and Bezos Earth Fund; the Asian Development Bank, World Bank, and other development banks; and European countries. Its goal is to parlay those funds into another $90 billion of public and private investment that will enable countries seeking to bring power to their citizens to skip the highest-emitting options,” notes IHS Markit.