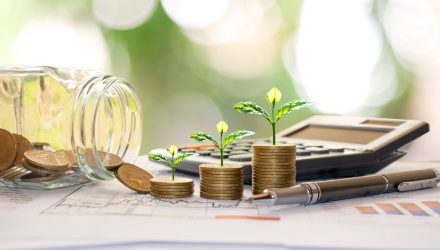 Geopolitical tensions, including those between the U.S. and China, are highlighting the need for more advanced, sustainable energy policies. The same is true of Russia’s war against Ukraine, which is exposing the vulnerabilities of Europe’s dependence on Russian oil and gas.

In particular, Russia’s invasion of Ukraine is reminding governments and investors that energy security is a major component of national security; look at the recent sabotage of the Nord Stream pipeline. Although Russia hasn’t admitted to it, prevailing wisdom is that the country intentionally damaged the pipeline to flex its muscles toward the rest of Europe.

Incidents like that could compel European countries to devote more focus and resources to renewable energy, and that could benefit exchange traded funds such as the Goldman Sachs Future Planet Equity ETF (GSFP). GSFP allocates 36.4% of its weight to Europe ex-U.K. stocks and another 2% to London-listed names, according to issuer data.

“The latest US fiscal package, the Inflation Reduction Act (IRA), includes $370 billion in energy and climate incentives—more spending in this area than any other single piece of legislation. For renewables companies considering capital expenditures, this package provides greater policy certainty for longer periods,” according to Goldman Sachs Asset Management (GSAM).

In the U.S. and China, the world’s two largest economies, a major part of the renewable energy equation is electric vehicles (EVs). While GSFP is not a dedicated EV ETF — it doesn’t hold shares of Tesla (NASDAQ:TSLA) or Nio (NYSE:NIO) — it has some leverage to EV adoption trends. Moreover, GSFP is actively managed, indicating it has more flexibility than index-based counterparts.

“We also see investment potential in companies installing electric vehicle (EV) infrastructure needed to support widespread adoption of EVs and the electrification of the transport sector,” added GSAM. “Globally, the total number of EV charging connectors, including private chargers, grew by 40% in 2021 to approximately 9 million. With forecasts for a global installed base of 30 million public EV charging connectors and about 300 million private connectors by 2040, we believe companies operating in this space have strong growth potential.”