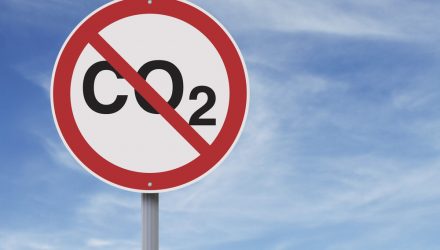 Carbon Commotion Could Be Golden for GSFP

Companies and governments around the world are racing to reduce carbon emissions and meet various carbon neutrality goals. They need to work faster.

Intensifying that effort could bring benefits for exchange traded funds such as the Goldman Sachs Future Planet Equity ETF (GSFP). Actively managed, the newly minted GSFP is one of a small number of ETFs leveraging stocks to capitalize on a new era of carbon awareness.

“Governments, corporates and consumers are aligned in driving a global sustainability revolution. Yet the scale of the challenge is so large that a holistic approach is necessary, with solutions to reduce greenhouse gas emissions required across many different activities,” according to Goldman Sachs.

The GSFP methodology is exceedingly relevant today because due to rapid energy shortage, some good work on the carbon reduction front could be undone, meaning that future plans will need to be even mightier than original efforts.

“The trajectory poses a new threat to the Paris Agreement goal of limiting global temperature increases to 1.5° Celsius. China, India and other developing economies are driving the demand for coal, but even the U.S. is poised to increase its consumption of the dirtiest fossil fuel in almost a decade, according to a forecast from the International Energy Agency,” reports Aaron Clark for Bloomberg.

GSFP has a concentrated lineup of just 51 stocks, but that intense focus coupled with active management gives investors a compelling mix with which to capitalize on the fight against carbon emissions. That’s meaningful because there’s ample work to be done to cut those emissions, confirming that some GSFP holdings could be attractive growth stories in the years ahead.

“The world’s CO2 emissions peaked just prior to the onset of the Covid-19 pandemic, then in 2020 registered the biggest annual decrease since at least 1965, according to data from BP Plc. Releases of the greenhouse gas this year through August are just 1% less compared with the same period in 2019, according to Carbon Monitor, an emissions monitoring group,” reports Bloomberg.

GSFP taps into another important: the global nature of the fight against carbon emissions. Nearly 58% of GSFP’s holdings are companies based outside of North America. Add to that, more than 35% are European companies — a relevant point because that region is one of the global leaders in the quest to reduce greenhouse gas emissions.