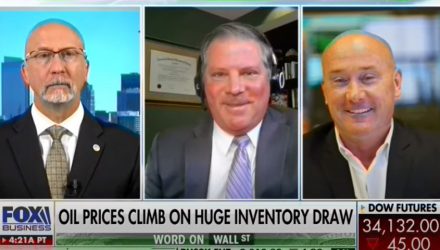 As world economies open up, oil prices are back to levels not seen in three years. ETF Trends CEO Tom Lydon joined Maria Bartiromo on “Mornings with Maria” to discuss rising oil prices ahead of the G-7 Summit meeting between President Joe Biden and Russian Prime Minister Vladimir Putin.

With oil prices at around $72 per barrel as President Biden heads into the G-7 Summit meeting, Lydon noted how even with a steady rise in prices, the traffic on the freeways shows just how willing Americans are to pay for it. With the country re-opening, more people are planning road trips.

Shifting gears, Lydon also stated: “Along the same lines is inflation. We’ve seen agriculture prices go up, base metal prices go up, housing prices go up, labor prices on the lower end have shown the problems had with getting younger employees back to work. They’re getting paid through stimulus checks to actually stay at home over the summer. So, when we look to the Fed and their messaging, most people are saying they’re not going to give us any real guidance until they get together at Jackson Hole at the end of August, we may see much damage between now and then.”

As far as how ETF flows may change in the commodities markets, Lydon noted how the bond market could be damaged. While most flows went into fixed income ETFs last year, it’s been much different in 2021. There’s been a big shift toward commodity-related ETFs, including the Invesco DB Commodity Index Tracking Fund (DBC), which is over 5 billion dollars at present.

Lydon added that “it’s been on fire, and it’s a great way to hedge against inflation.”