You are at:Home»Investing»Former Fed Chair: Inverted Yield Curve a Sign of Rate Cut, Not Recession 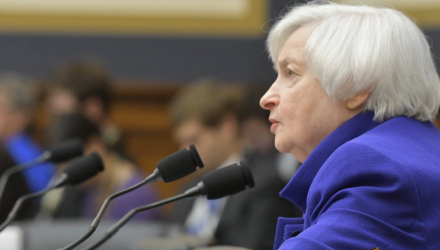 A recurring theme of “patience” was mentioned in Federal Reserve Chairman Jerome Powell’s press conference following the rate announcement. Additionally Powell mentioned that the U.S. economy is in a “good place.”

Fears of a global economic slowdown affecting the markets were on the central bank’s mind.

Recently, results from a survey of central bank respondents revealed that gross domestic product is expected to slow to a 2.33 percent rate of growth this year after initially forecasting 2.44 in January.

“The U.S. is certainly experiencing a slowing of growth,” Yellen said.

According to Yellen, however, GDP won’t slow enough to a point where it reaches a recessionary pace.

“So that’s not a dangerous situation,” she said. “So, yes, growth is slowing, but I don’t see it slowing to a level that will cause a recession.”