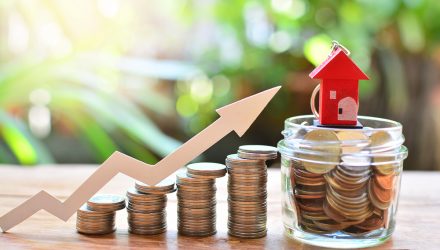 Mortgage interest rates are on the way up, which may not be a positive sign for current or prospective homeowners, but is a welcome sign for the Vanguard Mortgage-Backed Securities Index Fund ETF Shares (VMBS).

Having seen enough economic data to warrant an increase, the Federal Reserve recently noted that it would taper off its stimulus measures brought on by the pandemic. This includes the implementation of rate increases in 2022 as inflation continues to rise.

“It was only a matter of time, but mortgage rates may finally be heading the way many housing experts have expected them to travel by this point in 2021: sharply upward,” a Yahoo! Finance report noted. “Rates on America’s most popular types of home loans surged last week, according to a widely followed survey.”

“Mortgage rates rose across all loan types this week as the 10-year U.S. Treasury yield reached its highest point since June,” said Sam Khater, Freddie Mac’s chief economist. “Many factors led to this increase, including the Federal Reserve communicating that it will taper its support of the capital markets, the broadening of inflation and emerging energy supply shortages which compound other labor and materials shortages.”

Even as rates tick higher, VMBS can also rise in tandem since it derives its income from higher rates in mortgages. With debt holdings backed by the government, VMBS gives fixed income investors that extra layer of security.