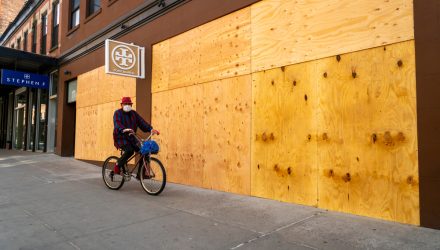 On Friday, Treasury bond exchange traded funds strengthened with yields tumbling, as the growth outlook weakened in the wake of the plunge in consumer sentiment.

Treasury yields pulled back after the University of Michigan’s gauge for consumer sentiment declined to a preliminary August reading of 70.2, from July’s reading of 81.2, Reuters reports. Economists surveyed by Dow Jones had anticipated a reading of 81.3 for August.

U.S. consumer confidence is now at its lowest level since 2011, posting the sixth-largest drop in the past half century of the survey, as fears about the Covid-19 delta variant and the reopening of the economy continue to weigh on the economic outlook.

“That combined with thin liquidity and Delta (coronavirus) variant is probably what is driving the move this morning,” Jeffery told Reuters.

The plunge in the University of Michigan consumer confidence survey “suggests the latest wave of virus cases driven by the delta variant could be a bigger drag on the economy than we had thought,” Andrew Hunter of Capital Economics wrote in a note, according to MarketWatch. “With the fiscal stimulus boost now well passed and surging prices starting to hit real incomes, the drop in confidence is another reason to expect consumption growth to slow sharply over the coming months.”

The lower growth outlook may also allow the Federal Reserve to push off on any tapering it has planned for its bond purchasing program. Many economists previously anticipated the Fed to soon announce plans to curtail its monetary accommodation, which was first introduced to support an economy ravaged by the coronavirus pandemic. Investors are now watching for the Fed’s decision on raising the topic of tapering its asset purchases in the upcoming three-day Jackson Hole Economic Symposium, which starts on August 26.