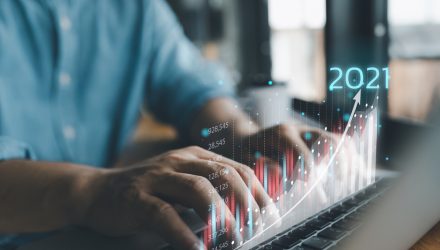 Treasury bond exchange traded funds weren’t immune to the broad selling on Monday as a sell-off in big technology names rippled through the market and fueled the risk-off sentiment.

“Bond yields appear to be preparing for an eventual pull back by the Fed while equities could rebound briefly on upcoming strong earnings reports,” Sit Investment Associates senior portfolio manager Bryce Doty told clients, according to CNBC, adding that the market’s attention will be now focused on the upcoming earnings season.

“October can often be a volatile month for financial markets as companies acknowledge they can’t all make their original forecasts for the year,” added Doty.

Government bond yields initially fell on Monday but rebounded toward the end of the session. U.S. markets have been oscillating on the recent volatility as many investors anticipate further turbulence ahead.

Traders are pointing to risk factors like negotiations in Congress as lawmakers debate the debt ceiling ahead of a deadline this month so the government can pay its bills and avoid a default. Democrats are also working on the next spending package to improve its chances of being passed with Republican support. Additionally, the Biden administration is also set to reveal its China trade policy after a review of import tariffs, the Wall Street Journal reports.

“You’ve got a combination of uncertainty out of D.C., continued headlines out of China about Evergrande and against a backdrop where you’ve seen bond yields rise,” David Stubbs, global head of investment strategy at J.P. Morgan Private Bank, told the WSJ. “This should all eventually be manageable but this is the problem with policy uncertainty, especially about the world’s two largest economies.”