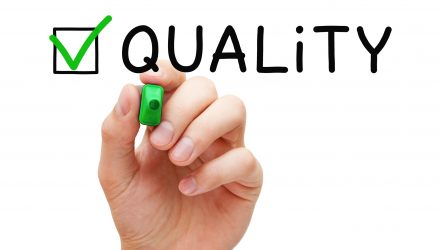 Opt for Quality Debt in the Fixed Income ETF Market

October brings playoff baseball into sports, but for the capital markets, volatility could bring curve balls to investors. As such, when playing in the fixed income exchange-traded fund (ETF) market, it’s best for investors to opt for quality debt.

The jobs and manufacturing data, for example, got analysts as well as economists alike swinging and missing.

According to CNBC, the “U.S. economy added 136,000 jobs in September, the Bureau of Labor Statistics said Friday. Economists polled by Dow Jones expected an increase of 145,000 jobs. However, the unemployment rate fell to 3.5%, a 50-year low.”

“This sounds like a Goldilocks number to me,” said Steve Grasso, director of institutional sales at Stuart Frankel. “It still gives the Fed some room for cover to cut rates. This is as close to a not-too-hot, not-too-cold greeting for the market.”

In the same week, U.S. manufacturers posted the biggest contraction in September since the end of the 2007-2009 recession, reflecting a slowdown in the U.S. and global economies that is further amplified by a protracted trade war with China.

The new export orders index was just 41%, the lowest level since March 2009, down from the August reading of 43.3%, ISM data showed.

Meanwhile, the bond market could be fragile with respect to the lowest investment-grade debt.

“The BBBs make up more than half of the investment-grade bond market—about 60% excluding banks, according to the bank,” wrote Alexandra Scaggs in Barron’s. “They add up to more than $3 trillion of bonds, while the entire U.S. high-yield bond market is worth around $1.2 trillion. The fear is that a wave of BBBs will get downgraded to junk in a recession, and that those companies’ bonds will flood the high-yield market and drive prices lower across the market. Even worse, that market pressure could drive up borrowing costs for the very riskiest companies, making them more likely to default.”

Investors looking to gain broad-based exposure to bonds can look at funds like the ProShares S&P 500 Bond ETF (NYSEArca: SPXB). The fund seeks investment results that track the performance of the S&P 500®/MarketAxess Investment Grade Corporate Bond Index, which consists exclusively of investment-grade bonds issued by companies in the S&P 500.