You are at:Home»Fixed Income Channel»Municipal Bonds Are the Apple of Fixed Income Investors’ Eyes 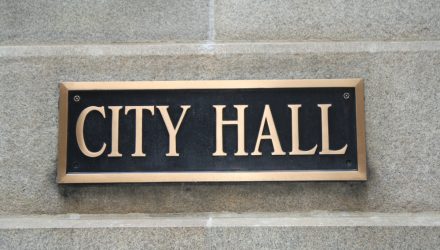 Municipal Bonds Are the Apple of Fixed Income Investors’ Eyes

“The yield on the S&P Municipal Bond Index this summer fell below 1% for the first time since it was created in 1998,” a Wall Street Journal report said. “The index tracks returns on a selection of core municipal bonds from across the market and assumes any interest thrown off is reinvested. The yield in question—known as yield to worst—is the lowest rate the investor can expect to earn short of a default.”

“Still, investors can’t get enough of the bonds,” the article said, noting the high interest in munis. “Prices have surged even though outstanding muni debt has swelled by more than $100 billion in the year ended March 31, according to Federal Reserve data. Cities and states could probably sell an additional $89 billion in bonds without meaningfully driving down prices, according to an analysis of lending capacity by Municipal Market Analytics.”

Per the fund description, VTEB tracks the Standard & Poor’s National AMT-Free Municipal Bond Index, which measures the performance of the investment-grade segment of the U.S. municipal bond market. This index includes municipal bonds from issuers that are primarily state or local governments, or agencies whose interests are exempt from U.S. federal income taxes and the federal alternative minimum tax (AMT).

One of the factors driving the strong demand for municipal bonds is their inherent tax advantages. That’s especially the case given the current U.S. presidential administration’s proclivity for raising taxes.

As such, getting tax-free income is a prime option to lower investors’ tax burdens. The other reason driving demand for munis is the relative stability of local government debt.

Local governments have been able to successfully stave off the effects of the pandemic, making municipal bonds a prime option for investors looking for a stable debt market.

“Meanwhile, many states, cities and counties have weathered the Covid-19 pandemic far better than expected, assuaging investor concerns that pandemic-related budget pressures could drive down the value of some local-government debt,” the Wall Street Journal article said. “Moody’s Investors Service raised its outlook on state and local governments to “stable” from “negative” in March, citing better-than-expected revenues and federal stimulus.”