You are at:Home»Fixed Income Channel»Municipal Bonds Are Back in Vogue: 1 ETF to Consider 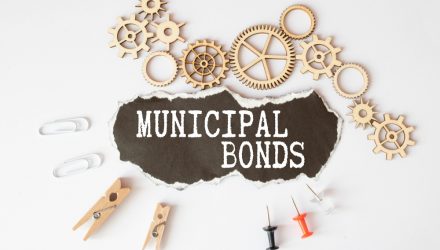 Municipal Bonds Are Back in Vogue: 1 ETF to Consider

Rising yields and interest rates struck down the municipal bond market, but they could be back in vogue after a first-half sell-off in 2022. Bargain-hunters could be sifting through municipal debt to find value.

“The pain in the U.S. municipal debt market has finally started to subside after the worst start to the year in four decades, as cheap bond prices and fears about a slowing economy coax investors back,” the Financial Times reported. “This year to late May, investors pulled $57 billion out of municipal mutual bond funds, according to EPFR data.”

Furthermore, the outflows were followed by history-making numbers for munis, but not the good kind.

“The sell-off drove returns in the first quarter to negative 6.2%, as measured by the Bloomberg municipal bond index, the worst quarterly performance since 1981,” the article added further.

Now, the market appears to be shifting in favor of munis again. They were a loved corner of the bond market, especially during the height of the pandemic when investors sought the safety of local government debt.

“The market began to recover last month, with returns now up 3.6% from a three-year low hit on May 18,” the report said.

Prospective bond investors could be lured by the bargain prices in munis in the current market environment. Given the yields relative to corporate bonds, munis offer a fixed income option without the higher credit risk associated with their corporate counterparts.

“At last month’s lows, munis offered nearly as much yield as comparable corporate debt, but with far less risk,” the report said further. “Municipal government issuers are less likely to default than companies during a recession, which some economists view as increasingly likely.”

The rising risk of a recession is also re-attracting bond investors back to the safety of munis. Investors who want broad exposure via an exchange-traded fund (ETF) can consider the Vanguard Tax-Exempt Bond ETF (VTEB).

“It has been a remarkable turnaround,” said Peter Cramer, a portfolio manager at Sun Life Capital Managemen. “I think we’re headed for a recessionary environment, and if that’s the case, municipals tend to be an area that you’re better off being in.”