You are at:Home»Fixed Income Channel»Muni Bond ETFs Are Making a Recovery on Low Supply 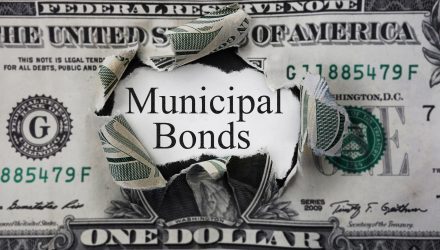 Muni Bond ETFs Are Making a Recovery on Low Supply

Municipal bonds and related muni bond ETFs are bouncing back from the losses earlier in the year as U.S. states and cities cut back on new issues.

Prices on munis have more or less recovered from their worst first-quarter slump in 15 years as municipalities continue to reduce borrowing, reports Heather Gillers for the Wall Street Journal.

Municipalities borrowed $156 billion over the first half of the year, or down 17% from last year. Citigroup researchers project borrowings could fall as much as 25% by the end of 2018 year-over-year.

Meanwhile, the sudden dearth in supply has helped prop up valuations of existing debt and diminished borrowing costs for some governments, notably riskier bond deals.

“It’s a seller’s market,” Howard Cure, director of municipal-bond research at Evercore Wealth Management, told the WSJ. “We’re trying to be careful about that aspect of it and not go down that path of sacrificing for a little extra yield and having a big decline in credit quality.”