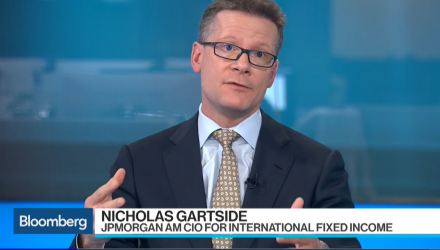 Nicholas Gartside, JPMorgan AM CIO for International Fixed Income, and Jeremy Stretch, head of FX strategy at Canadian Imperial Bank of Commerce, were on “Bloomberg Surveillance” to discuss European Central Bank policy and the euro.

Gartside and Stretch both divulged their views on the ECB’s interest rate moves thus far this year.

“If you think about the trajectory for growth in Europe, it’s biased to be stronger, not weaker,” said Gartside.  “Europe’s had a very poor first quarter; the risk is stronger into year-end so when you look at pricing for the ECB, there is no reason they can’t move rates June of next year.”