You are at:Home»Fixed Income Channel»Goldman Sachs: Movement to Bonds the Largest Since 2008 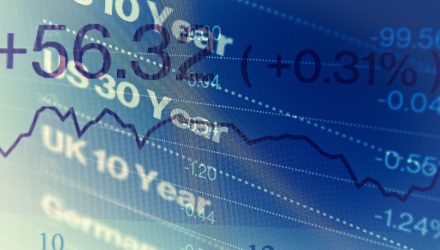 Goldman Sachs: Movement to Bonds the Largest Since 2008

In the wake of the financial crisis in 2008, investors shuffled their capital into bonds as the subprime mortgage crisis manifested itself in the stock market, causing chaos in the financial markets. Fast forward over 10 years later, and global investment firm Goldman Sachs is noticing that the movement to bonds mimics that same time period and more.

Per a Business Insider report, “US equity funds saw net outflows of $173 billion in the past 12 months, according to Goldman. Bond and cash funds saw inflows of $259 billion and $592 billion, respectively. The 12-month flow gap from stocks to bonds and cash is the biggest since 2008, the analysts wrote.”

As opposed to mortgage meltdown, the reasons are different this time around. A confluence of various events are creating an environment where safe haven assets like bonds are attractive.

“Decelerating US economic growth, trade and geopolitical uncertainty, and near-record high starting equity allocations have likely contributed to the rotation from equities to bonds and cash this year,” Goldman analysts said.

From a prima facie standpoint, however, it appears all is well. The S&P 500 reached a record high in Monday’s trading session as news of a U.S.-China trade deal progressing and better-than-expected third-quarter earnings reports are fueling positive market sentiment.

Nonetheless, Goldman Sachs views the recent events as a reason for investors to cash out while equities are thriving. In turn, more allocations to bonds could continue through 2020.

Furthermore, any prop up in equities could be artificial demand due to corporate buybacks.

“Goldman expects corporate buybacks to prop up equity demand, but the bank’s analysts previously forecasted a steady decline in repurchases through 2020,” the Business Insider report noted. “The peak in buyback activity arrived in 2018 after the Trump administration’s tax cut fueled a wave of repurchase programs. Buybacks are projected to fall 15% in 2019, and drop another 5% in the following year, Goldman said.”

Investors who want core exposure can look to funds like the  iShares Core U.S. Aggregate Bond ETF (NYSEArca: AGG). AGG is the big fish in an even bigger sea of bond exchange-traded funds (ETFs).

What’s under the hood of this ETF that gives investors the much-needed core bond exposure, especially in today’s volatile market?