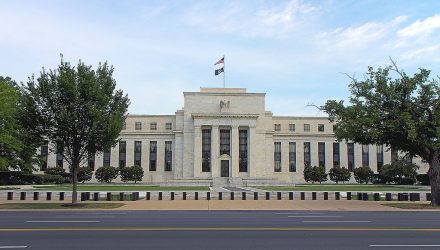 With the economy growing at a rampant pace and the capital markets predisposed to the idea that a steady diet of higher rates were forthcoming, the Federal Reserve decided to stand pat by keeping rates flat after concluding a two-day monetary policy meeting.

In addition, they upgraded their view of the economy to “strong,” thereby leaving the door open for more rate hikes to come through the rest of 2018. The Fed stated that the labor market has “continued to strengthen,” which was evidenced by the latest economic data revealing that private payrolls increased in July by 219,000 versus an expected 185,000, according to data provided by ADP and Moody’s Analytics. Furthermore, the Fed noted that “economic activity has been rising at a strong rate,” versus their “solid” growth view.

The stronger economic view comes after the Commerce Department reported that GDP grew at a 4.1 percent rate in the second quarter–its fastest in nearly four years. In addition, the unemployment rate is at a generational low of 4%.

In June, the Fed estimated that GDP would rise 2.8 percent for the full year until it was changed to 2.4 percent for 2019 and 2% in 2020 before settling into a long-term pattern of 1.8%. U.S. President Donald Trump’s administration intervened with that vision, saying that a mix of lower taxes and regulation in conjunction with increased spending could accomodate a growth rate of at least 3%.