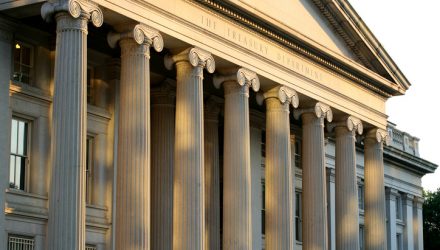 ZROZ aims to capture the returns of The BofA Merrill Lynch Long US Treasury Principal STRIPS Index. By tracking the index, the fund aims to achieve, before fees and expenses, the yield and duration exposure inherent in this index.

In explaining why it makes sense to go with long-term treasuries and zero coupons, Lydon describes how the U.S. is currently in a low-interest rate world.

“Nine months ago, we were looking at the Fed hiking rates, and maybe more hikes coming,” Lydon said. “Today, we’re in a lower interest rate environment. Many are feeling, in addition to the cut we just had, there may be a couple more between now and the end of the year.”

As Lydon points out, that means that overall, there will be lower yields. The key is looking at the performance of long-term treasuries measured by ZROZ. It shows they are up over 30%. So, even while taking whatever yield there is, there’s some availability for appreciation.

“Never in a million years did anybody feel like we’d see long-term treasuries appreciate by 30%, going into 2019, but it’s happened. And the facts are, if we see a couple more cuts, we could actually see some more room for appreciation,” Lydon notes. He adds how ZROZ has been up over 14% just in the last month.

Portfolios Could Benefit From Appreciation

For investors looking at their portfolios, somewhat distressed due to reduced yields, there’s also the fixed-income portion of those portfolios that could make some money on the appreciation side between now and the end of the year.

With that in mind, while short duration and high quality in the bond market led into rising interest rates a year ago, things are now approaching a declining rate environment, investors can now go out on the yield curve and duration, in addition to risk, if there’s a move away from the Treasury markets. Still, looking at duration in the fixed income portfolios, particularly if its short (between 1 and 7 years), it’s probably safe to go out longer on duration and grab some in the form of ZROZ, for example.

When asked where the money comes from for all of this, Lydon explains how there are multiple options. It could come from the short side, as well as cash or money market funds. There’s also word that in the next 12 months, running it from a tactical standpoint, one could run a 200-day average on ZROZ and it will correlate very highly with what interest rates do.

Another point, Lydon explains, is how it’s important to consider domestic and international holdings. There’s a bit of a stronger dollar and an easing in developed markets outside the US and troubled emerging markets.

So, a currency play means staying in the US makes a lot of sense. Investors with foreign currency exposure means bringing it over stateside would be a good idea in a longer duration Treasury opportunity in the next 12 months.

When asked if this is a 200-day moving average play, Lydon responds that it is, “Absolutely.” However, as Lydon notes, “I’m just going to caution folks, you can’t just buy it, set it, and forget because we will at one point see rates stabilize. We will see rising interest rates, again, at one point in time.”

A final positive is that while things are stable in America, the weakness overseas does have a positive effect on lower interest rates in the US. “As we’re seeing actually negative rates in some areas around the world, we still have positive rates, and we’ve got room to go lower. That means we’ve got some room for appreciation, especially on the long Treasury side,” Lydon concludes.